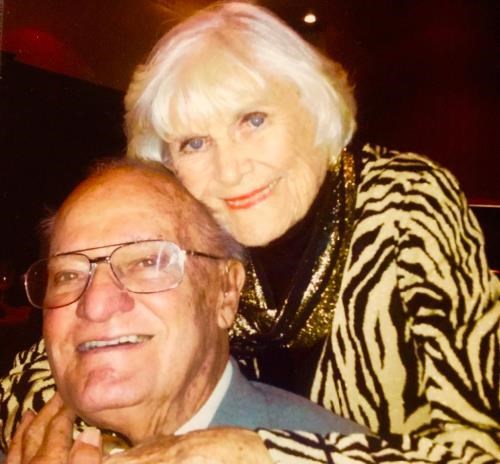 Lois Kathryn Scott Call (Mar 22, 1923- Apr 4, 2018) was born in “her city,” San Francisco, to Lillian Marie Rebecca Puckhaber Scott and Harry Scott. She grew up with an extended family of Puckhaber and Scott Aunts, Uncles and cousins. All holidays were spent with a loving family telling tales, playing games and laughing. Lois attended Laguna Honda grammar school and graduated from Polytechnic High School. After graduation from “Poly” Lois went to Comptometer School, worked as a switchboard operator, a bookkeeping assistant, then to Associated Oil where she operated a comptometer before marrying her beau of five years… “the tan hunk in the tight white trunks” doing swan dives off the high dive at Forest Pool in Boulder Creek. After a “war time” marriage Lois spent the next 74 years as a loving wife, volunteer at the USO during WWII, doting mother… burger flipping volunteer at Stanford Convalescent Garden Café… bridge player extraordinaire… Green Hills golfer… and Palm Desert Lakes putter and Mahjong player.
Lois continued to be active in her grandchildren’s lives going to ballgames, recitals and appeared to be the happiest when singing “Pony Boy” to her 13 great-grandchildren. Lois was pre-deceased by her incredible parents and adored sister, Jean Macdonald.
We all will miss her, but hope to continue to celebrate her feisty spirit, and her zest for life and for people.

Glen Sterling Call (Feb 18, 1922- Sept 22, 2018) was born in Bancroft, Idaho to parents Essie Electra Parks and Loren Vasco Call. He was pre-deceased by his father who died when Sterling was two years old, as well as by his mother, Electra, and older brother, Don. Following Loren’s death, Electra moved her sons to San Francisco where she had family on her mother’s side. Sterling attended Aptos Middle School and Balboa High School. In addition to academics, he excelled in soccer and gymnastics. To stay in shape he would walk on his hands up and down the stairs near the children’s playground in Golden Gate Park. During high school he traveled to Boulder Creek where he met and wooed his lifelong girlfriend with a cherry cola.

After high school Sterling was attending Heald School of Engineering when WWII broke out. He enlisted in the Army Air Corps and trained as a pilot. His active duty as a co-pilot was short-lived with one takeoff of a B-17 and a crash landing into occupied France after all four engines malfunctioned. Sterling was picked up by a miller on a bicycle and taken to a safe house where he was sheltered by a brave widow and her two children until the Free French Resistance Group (“Macquis”) came and said that for his and the Trouchot Family’s safety he had to leave immediately. He never forgot the benevolence of Madame Trouchot. He was moved from one safe house to another until winding up in a Macquis Camp. Sterling participated in raids against the Nazi occupiers with a British group and arrived in Paris the day after Patton. After being missing in action for 3 months and earning a purple heart Sterling was reunited with the allied forces.
Sterling’s interest in the intricacies of engraving and electronics led him to a professional life devoted to the production of printed circuits. He was also active in a printed circuit organization that promoted the creation of jobs in this burgeoning industry. He was deeply appreciated by his production team, who spoke highly of his care for them, his fairness, and his supportive leadership skills. Sterling always spoke with genuine respect for the skill and dedication of his employees.
Sterling was a member of the Olympic Club for over 75 years and enjoyed playing handball and golf during his years there. He looked forward to weekly lunches, camping trips and general hijinks with his friends of over 70 years… the Big 6 Plus 1. We will miss him, but are grateful for his example of courage, tolerance, innovation, and fairness.

Sterling and Lois started their post war lives in San Francisco as “young marrieds” making friends that lasted a lifetime before settling in Millbrae and Burlingame for the next 70 years.
Together Lois and Sterling became active members of Green Hills Country Club for over fifty years, adding their golfing family to their life-long friends. Lois served as Ladies Captain, played golf and bridge and annually participated in the skit for the Captains Luncheon. Sterling served as Club President also ensuring that the GHCC Seniors Team came to fruition. Green Hills was their home away from home. Together they golfed, traveled the world, and celebrated life. This passion for life was shared with family and friends in Lake Tahoe and Palm Desert.

We thank Doctors Steyer, Nanevicz, Adler, and Pope and their marvelous staffs for treating Lois and Sterling with kindness and respect. They are credited for holding Mom and Dad together with baling wire and Dad’s favorite… epoxy.
Our gratitude goes out to Sutter Hospice, which has cared not only for mom and dad, but our entire family. They guided us through this journey with grace.

Lois and Sterling were given the gift we dreamed of by the most incredible women. Vuta lived with and cared for them for six years, and, Rai for 2 1/2. They were joined by Lella, Ita, and Karina and together they made our hopes come true. Mom and Dad were safe and happy in their home where each of them passed peacefully. We are eternally grateful for the joy they brought into the Call home.

After 74 marvelous years, Sterling continued to comment on Lois’s beauty, and Lois would say, “here’s my guy” when Sterling would enter the room. We know they’re holding hands again somewhere. So blessed they were ours.

In lieu of flowers please consider a contribution to Sutter Care at Home Hospice of San Mateo or Wounded Warriors.